From Adaminaby you can visit many historical sites in the Snowy Mountains and Monaro region.

Adaminaby and Lake Eucumbene have a rich history.

The first inhabitants were the Aborigines. During the summer months, Aboriginal groups from both sides of the mountains met and feasted on the Bogong moths. Mt Jagungal in the Kosciuszko National Park is a well known site for these gatherings.

Early European settlers came with their livestock. They settled on the Monaro plains and took their livestock to the mountains over summer, resting the lower lands and fattening stock on the sweet high country pastures.

The gold rush at Kiandra brought miners in their thousands.

The Kiandra goldfields also saw the birth of skiing in Australia.

Adaminaby (once known as Seymour) was on the 'road' to the diggings, and it grew rapidly.

A network of scattered communities developed near the mountains, with their own (often part time) bush schools. The old township of Adaminaby near the Eucumbene River was a social and service centre for these families, a thriving town with two schools, racecourse, annual show and by the 1950s, its own picture theatre.

Visit Stewart's Information and Gallery in Adaminaby to find out more about the history of Adaminaby, Kiandra and the coming of the Snowy Mountains Scheme.

Adaminaby and Lake Eucumbene are synonymous with the Snowy Mountains Scheme. The very first stone was turned at the 'old town', to begin Australia's largest hydro-electric and irrigation scheme.

The Scheme was officially opened in Adaminaby on 17 October 1949 by the then Prime Minister Ben Chifley and Governor General Sir William McKell. Construction took 25 years.

Claimed as the birthplace of Australia's multiculturalism, the Snowy Hydro Scheme employed 100,000 people from many nations. It saw the creation of Lake Eucumbene. The town of Adaminaby was moved 9km to its present site to make way for the rising waters.

The Snowy Scheme Museum in Adaminaby highlights the lifestyle and achievements of the workers of the Snowy Mountains Hydroelectric Scheme. 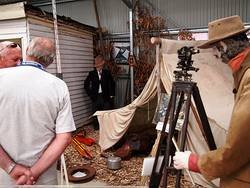 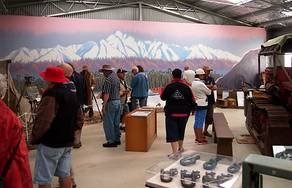 Travel our district by car, bike or motorbike; or go bushwalking or horseriding in Kosciuszko and Namadgi National Parks. You will see hints of old roads, tracks and yards; remnants of sawmills and goldmining equipment, and the famous mountain huts.

There are relics of the former town to be seen at Old Adaminaby, particularly when the waters of Lake Eucumbene are low.

Explore the Old Adaminaby cemetery, and spend an afternoon at the Snowy Scheme Museum.

Find out more about Kiandra's past

Currango near Tantangara Reservoir in the Kosciuszko National Park is a prime example of early European settlement above the snowline. Over 25 buildings and ruins remain of the old station, spanning 150 years. Currango also offers self-catered accommodation.

Yarrangobilly Thermal Pool, Yarrangobilly River and limestone caves are an easy drive from Adaminaby; or you can stay at Yarrangobilly Caves House, once a popular guesthouse for visitors. It has recently been restored to its graceful early 20th style and the 1917 section has won heritage awards.

If you are researching  family history in our area, visit the Monaro Pioneers website which has a database of over 350 000 names as well as extensive historical notes.